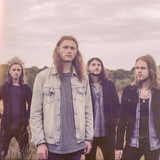 "The Bradford, UK-based quartet set out with the intention of creating a sound which fresh and unique. But that barely even captures the ingenuity which has gone into this deftly stylised single which proves that whether they’re creating soft Folk or cataclysmic Alt Rock they’re a force to be reckoned with." - A&R Factory on 'Indigo'   "KILNSEY GREEN’s blues based indie-folk pop/rock aggression is anchored by the beautifully crafted emotions of the lyrics." - Comeherefloyd on 'Rainfall'   Photographs by Danny Payne