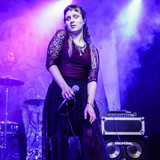 Formed in 2009 by Aryan Havrest and Jakob Steiner, the symphonic metal project was long dormant until 2012 the vocalist Alexandra Kastrinakis and the other instrumentalists Mathias Gasser, Daniel Stockinger, Gonzalo Bevilacqua and Jakob Griller (2013) joined the crew. They soon released their debut EP "Hircine's Call", which opened the path to play with many important names of the genre such as Visions of Atlantis and to perform on legendary Festivals like Metaldays 2015. The 2016 single "Sleepers Awake" was the harbinger of a more mature and elaborate style. After a crowdfunding campaign the Saga of the Red Mountain was released on two CDs. First the 2016 EP "Cult of Ashes" arrived. The story was completed by the 2017 follow up full length album "The Divine Menace". With the help of guests like Morean from the legendary black metal band Dark Fortress, Ross Thompson from a capella wonders Van Canto and Georg Neuhauser from Austrian symphonic metal force Serenity a diverse and captivating story was told, that critics and fans all over the world enjoyed.