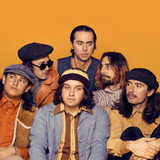 The Charities are on a mission to bring their twist on funk and soul music to the ears of the world. They are a band of 6 brothers from Southern California. Their music draws influence from the funk and soul sounds of Motown, to jazz, disco, R&B and even jam oriented rock n' roll. It's a melting pot of musical intentions because on an individual level, their roots and influences range even further. Taking an improvisational approach to live shows gives The Charities an opportunity to blend these influences in an organic way that is always unique to each moment. The exchange of energy between the audience and the band builds into an experience that cannot be expressed in the studio. That is not to imply any distaste for the recording process, however. Wherever they have found themselves dwelling, they have built their own recording studio and utilized their collection of analog equipment to capture their musical adventures. Their latest studio work and first official album, GBLO (Get Blasted, Listen to Oldies), came out of their home studio just outside San Luis Obispo, CA. The good times with The Charities are only just beginning!