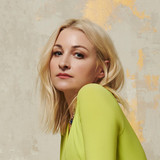 Kate Miller-Heidke is an award-winning singer-songwriter who traverses the worlds of contemporary pop, folk and opera. She has released four studio albums including O Vertigo! which debuted at number 4 on the Australian album charts, Nightflight, which reached number 2, and Curiouser, which reached double platinum sales and spawned the multi-platinum hits 'The Last Day on Earth' and ‘Caught In The Crowd'. Trained as a classical singer,

Kate has performed at the Metropolitan Opera in New York and for the English National Opera. Her debut opera as a composer, The Rabbits won 4 Helpmann Awards including Best Score and Best New Australian Work. Kate’s concert with the Tasmanian Symphony Orchestra at Mona Foma 2016 in Hobart won the Helpmann Award for Best Australian Contemporary Concert and has since been performed in cities around the country. An album of her concert with the Sydney Symphony Orchestra, Live At The Sydney Opera House, was released in 2017 and nominated for 2 ARIAs including Best Classical Album. With her collaborator Keir Nuttall, she has written the music and lyrics to Muriel's Wedding The Musical (The Original Cast Recording), which premiered at the Sydney Theatre Company. It won five 2018 Helpmann Awards, including Best Original Score. Kate represented Australia in the Eurovision Song Contest in 2019 with her song 'Zero Gravity', and was awarded the Marcel Bezençon Artistic Award. Kate will release her fifth studio album 'Child In Reverse' on Oct 30.