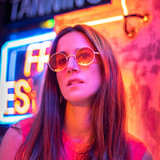 bands such as the British Crystal Fighters and TELEMAN, for the Mexican band Midnight Generation, and for renowned artists from the Spanish and Latin American indie scene such as Dorian and Javiera Mena, Sidonie, La Habitación Roja, Suu, Delafé and Delaporte or the French band Exsonvaldes, releasing on labels such as Sony Music, PIAS, Mushroom Pillow or Moshi Moshi.