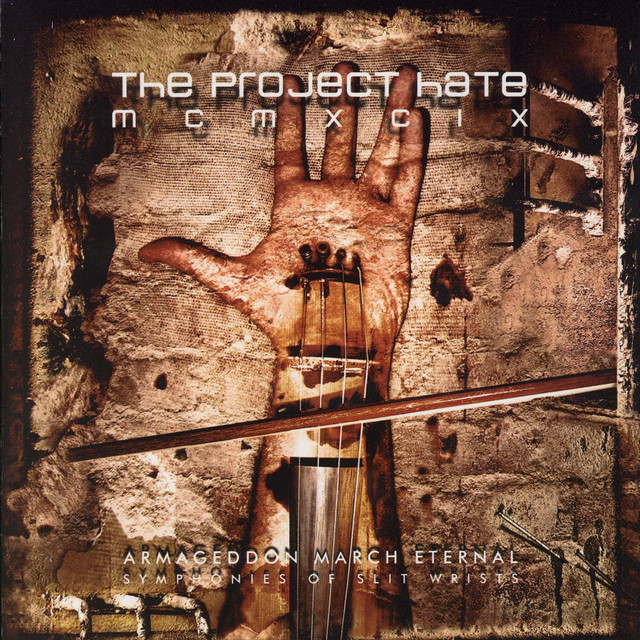 Formed by Lord K. Philipson (formerly of Leukemia, House of Usher, and Lame) and Jörgen Sandström (formerly of Grave, Entombed, and recently of Vicious Art and Krux) in 1998, the Project Hate MCMXCIX (aka TPH, or --simply -- the Project Hate) would take on more members and become a death metal outfit of some renown in the change over from the 20th to 21st centuries. Their 1998 Dan Swanö produced demo, featuring L.G. Petrov on backing vocals, was good enough to land them a deal with German label Massacre Records in 1999. That same year, their full length debut hit the streets. Entitled Cybersonic Superchrist, the album was critically lauded, but a lack of promotion by their label resulted in poor sales and not enough buzz. The band also added vocalist Mia Ståhl during recordings. Their follow up, When We Are Done, Your Flesh Will Be Ours, was released in 2001, but the nagging problem of label backing and promotion stuck with the band, and not many fans were able to get their hands on the work. 2002 saw the Project Hate take on a guitarist, in the guise of Petter S. Freed, and that same year, the band finally pushed their label issues aside and got out of their contract with Massacre. A live album, Killing Helsinki, was released in 2003, the band went into the studio to work on album number three. Having leg go of the services of vocalist Ståhl, the band looked to Jo Enckell to take on the vocal work, and the result, Hate, Dominate, Congregate, Eliminate, was released in 2003 to positive reviews. 2005's Armageddon March Eternal -- Symphonies of Slit Wrists saw the addition of bassist Michael Håkansson as well as the band working once again with legendary producer Dan Swanö -- and marked the last album that the Project Hate would release for Threeman records. For their next record, the Project Hate took the next big step, employing the services of a drummer, Mojjo, and released the album In Hora Moris Nostræ in September 2007. ~ Chris True, Rovi