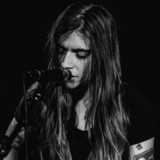 Paige Beller has steadily gained traction in midwest indie circles since her debut on the scene in the mid 2000’s. Known for her multi-instrument approach, she has turned what could have been another singer songwriter act into something that feels like an entire band, using drums, guitar, keys, synth and loops to create grand sonic landscapes. Beller’s style is raw and imaginative, delivering lyrics and melodies that are emotionally vulnerable, reminiscent of Rilo Kiley and Feist. Growing up in Cincinnati, OH, Beller was enamored by live performance. Shows and music quickly became an important part of life.

Paige got her hands on a cheap guitar as quickly as she could and began to teach herself to play. Her musical style is heavily influenced by the basement shows she grew up with as well as her love of all things doo wop. Beller has shared bills with artists such as Erika Wennerstrom (Heartless Bastards), R. Ring, and Hamell on Trial. Her love of playing music has taken her from coast to coast.