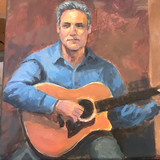 Born and raised in West Virginia, Jim has developed an acoustic style rooted firmly in Appalachian music, with uplifting, poetic lyrics. He began writing in 1989 in California after six years in the Marine Corps followed by a career in physics. Jim’s influences include Woody Guthrie, Bob Dylan, Joni Mitchell and John Denver. His songwriting is wide ranging, though instantly recognizable. His songs include poetic descriptions of the natural beauty of the mountains, with a viewpoint of optimism and hope.