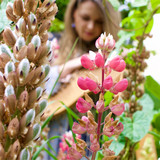 Aisling Lyons is a multi-award winning harpist and concertina player from Clare, Ireland.   Alongside playing with various groups and being involved in many collaborations, she is a competent composer of original music in the traditional Irish idiom. She has been described as ‘one of the rising stars and budding composers of the Irish harp world – rooted in tradition and beautifully inventive’.   Her debut album of original compositions is expected to be released during the Summer of 2021.