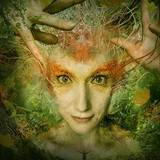 Hey there!I'm Siân Brown and I'm a singer/songwriter living in Cork city in Ireland. I'm also a music therapist, a neurological music therapist and a sound healing practitioner. Basically, music is my life! I started writing songs in my diary when I was 7. I started banging on a guitar when I was a teenager. I used music to get me through a very rough childhood with an angry alcoholic father. When the outside world was totally shit I'd listen to music, dance to music or make my own music to get myself through. Life's a better laugh now. I have just released my third solo album And She Was here on my page and I'm SO EXCITED about it. 12 new tracks with my awesome band mates Jimmy Wormall, Ed Blunden and Mike Jordan and including a spoken word poem by my friend and organic farmer Helena Walsh. I also co-wrote a song with my music therapy partner Laura Cahill and invited a tonne of my female friends to play and sing with me too.The album was produced by the award winning producer Jason Boshoff who flew all the way from Barcelona to Cork with his assistant Oscar Garcia-Bragado to record these hot new tunes in Clay Castle Studios Youghal. Between two Irish lock-downs, everyone involved grabbed the low numbers by the horns and belted out a record in record time! Just 6 days!!! We sanitized our hands, we jammed, we recorded, we laughed, I cried, we made a fucking record!I've never been so proud of a record as this..... NEVER GIVE UP ON YOUR DREAMS!!!Enjoy xxx