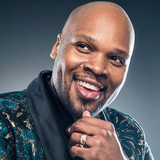 Michael James Scott has played the Genie in Disney’s Aladdin internationally including Broadway, London, the North American Tour and Australia (where he originated the role and won the Helpmann Award for Best Featured Actor in a Musical). He can be seen in the new Showtime TV series “Black Monday." He originated the role of the The Minstrel on Broadway in Something Rotten as well as Dr. Gotswana (aka The Guy with the Maggot Problem) in the Tony-winning smash hit, The Book of Mormon. Other Broadway credits include Mamma Mia, Tarzan, All Shook Up, The Pirate Queen, Elf, and Hair. He was the standby for the legendary Ben Vereen in the international tour of Fosse, taking over the role in Paris at the renown Théâtre du Châtelet. On the West End, he was the associate choreographer for the Broadway revival transfer of Hair. Off-Broadway, he co-starred in Here’s to the Public opposite Donna McKechnie and was also part of the concert cast of Jerry Springer The Opera at Carnegie Hall. Outside NYC, he was a part of original Las Vegas company of Jersey Boys and played the Donkey in Shrek The Musical at the famous St. Louis Muny. Regional credits include Aida, Ragtime, South Pacific, Cinderella and Little Shop of Horrors.