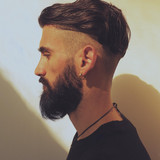 “A remarkable debut album. A compelling if unlikely hybrid of falsetto, Radiohead-like atmospherics and melodies as mellifluous as those of Dan Gillespie Sells, shey baba’s music is both beautiful and bleak" – The Sunday Times  'There's a powerful debut from new face shey baba…. with its slow, dreamy quality and his incredible voice, that drops effortlessly from a piercing falsetto to a lower, more intimate murmur.” – The Independent  Requiem - shey baba’s debut album - is out now.