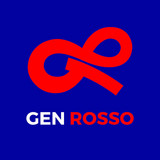 GEN ROSSO - INTERNATIONAL PERFORMING ARTS GROUP was founded in 1966 in Loppiano, a small town in the Tuscan hills just outside Florence: 850 residents from 65 countries around the world, it is the center of a multicultural coexistence founded on Christian values. For this originality, since its birth Loppiano has strongly attracted thousands of people, who come from all over the world to visit it. And it was precisely to welcome the many visitors that on Christmas 1966, Chiara Lubich (UNESCO Prize for Peace Education) wanted to give the youth of the little town a guitar and a red drum set. Hence the name of the group: Gen Rosso, where GEN stands for New Generation and Rosso (Red) is precisely the color of the first drum set. The intention was to communicate, through music, messages of peace and universal brotherhood and thus contribute to the realization of a more united world. Those were the years of youth protest, pacifism, beat generation, and the name 'GEN' was a wonderful addition to the wave of novelties that characterized that period. Gen Rosso's original activity stems from its artistic and cultural background, from the internationality of its components and from the personal commitment of each to implement, in the context of daily life, the values of which they become ambassadors. A few instruments, a couple of amplifiers and a lot of enthusiasm ... elements that still characterize it today.