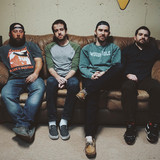 American Thrills is a punk rock band from Connecticut featuring members of The Tired And True (Eulogy Records) and Shut up and Deal. Founded in mid 2020, during a pandemic, the band came together to write their debut Self Titled EP. The EP was engineered by Nick Bellmore ( Make Do And Mend / Hatebreed ) and Mixed/Mastered by John Naclerio ( Brand New / My Chemical Romance ). The band's unique blend of upbeat punk rock with hooks for days and a sprinkle of Midwest emo caught the attention of New School Records ( No Trigger / Twenty2 ), who released the EP in late 2020.  The debut album was well received. According to Punk Rock Theory - "This is punkrock from the heartland and kinda what you wish The Gaslight Anthem still sounded like". The band recently returned to the studio with Chris Teti ( The World Is A Beautiful Place & I Am No Longer Afraid To Die ) to record their sophomore record Old Things, which is scheduled for an April release on New School Records (US) and Cat's Claw Records (UK).