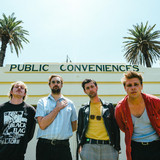 A. Swayze &amp; The Ghosts

Featuring A. Swayze &amp; The Ghosts

Tasmania’s A.Swayze & the Ghosts debut album Paid Salvation is out now! At a time when some young bands seem more concerned with social media followers than having something to say, Paid Salvation is a refreshingly real breath of fresh air, one that restores your faith in the incendiary, uplifting and subversive power of punk rock. The most recent focus from the album comes in the form of gloriously punchy new single ‘Evil Eyes’ and, much to the delight of Tassie fans (and the envy of fans elsewhere) today announced three headline COVID-safe shows across Hobart (Oct 17), Launceston (Oct 31) and Devonport (Nov 7). The Hobart natives have amassed a fierce live following thanks to their raw, bold and at times, wild shows – heightened by the notably charismatic and enigmatic lead singer, Andrew Swayze. Over the last two years A.Swayze & the Ghosts have performed at Falls Festival, Splendour in the Grass, The Great Escape, BIGSOUND (in many ‘best of’ lists across STACK, triple j, Double J, The Music), A Festival Called Panama and Boogie Festival. As well as shows alongside Shame, Total Control, Nude Party, Frank Carter & The Rattlesnakes, West Thebarton, Jet, The Vines, Batpiss & The Stems to name a few. The band have been championed overseas by BBC 6 Music, Beats 1, KEXP, CLASH, NME, Brooklyn Vegan & more, whilst on home soil, supported by community radio, triple j, Double J, The Music, Beat + many more