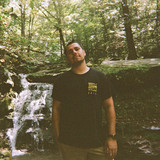 Kyle McEvoy is a multi-instrumentalist, songwriter, and producer based in New York. The Woodstock-based musician has recorded and toured with influential folk artist Kath Bloom and written/recorded alongside Ed Askew, The Shivers & L. Martin (of The Walters). McEvoy has also collaborated with producers like Philanthrope, Stan Forebee, and Brock Berrigan and has played guitar on tracks for artists like Peter CottonTale and Michael Christmas. While McEvoy’s reach is broad and his output is extensive, his sound remains wrapped around an ambient style. Music with a nostalgic sound brought on by melodic fingerpicking & slide guitar, often run through various vintage tape delays.