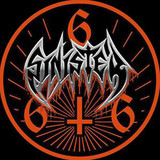 South Holland's Sinister were among the first death metal bands from the Netherlands to earn a global profile. Despite their revolving door lineup (vocalist Aad Kloosterwaard is the only original member), the band's attack remains strident, physical, and technically proficient, with a nearly constant sonic signature. Their cold, brutal guitar riffs and groove-laden drumming, blastbeats, chunky bass rhythms, and roaring guttural vocals have more in common with American bands (particularly from Florida) than European ones. A series of early demos in 1990 and 1991 garnered the metal underground's attention but it was their debut full-length, 1992's Cross the Styx for Nuclear Blast, that cemented Sinister's reputation for uncompromising brutality and made them stand out. The '90s saw Sinister continue to furrow deeper into the granularity of death metal orthodoxy even as other musicians moved on to play different extreme music subgenres. With 2001's Creative Killings, Sinister became one of the first death metal bands with a female vocalist in Rachel Heyzer. They essentially imploded after 2003's Savage or Grace and returned with new members for 2006's Afterburner, which was received as a return to form. The band moved to Massacre Records for 2008's The Silent Howling. Despite constant lineup changes, Sinister have continued to issue new studio recordings roughly every two years, including the globally acclaimed Syncretism in 2017. Sinister were born as a death metal-worshipping quartet in South Holland in 1988. The original lineup -- Aad Kloosterwaard on drums; Ron van de Polder on guitars; Mike Van Mastrigt on vocals, and Corzas on bass -- recorded 1990's Perpetual Damnation demo and circulated it at gigs and through fanzines. It sold some 1,500 copies -- well enough to encourage a series of demos, splits, and singles that won them a deal with Nuclear Blast in 1991. Their debut long-player, Cross the Styx, showcased new guitarist Andre Tolhuizen (van de Polder had moved over to bass) and landed on the European metal underground like an incendiary device, given the album's technical proficiency and unhinged force. They played only a few shows before re-entering the studio and emerging with Diabolical Summoning in 1993 and Hate in 1995. In addition to some of their own headline shows in European countries, the band undertook a 55-city U.S. tour as a support act on larger tours and headlined their own club dates. As the '90s waned, so did the commercial viability of death metal itself; black, gothic, alternative, and even nu-metal subgenres gained footholds in the marketplace. Sinister, ever the purists, remained steadfast in their commitment to death metal, evidenced by the mini-album Bastard Saints in 1996, the last outing to feature Van Mastrigt on vocals. Eric de Windt took over as frontperson for Sinister's brutal Aggressive Measures, released in 1998 with new guitarist Bart Van Wallenberg and bassist Alex Paul. It was the only album to feature his vocals. By the time they issued 2001's Creative Killings, Paul had been replaced by Occult's Rachel Heyzer up front, making Sinister one of the first death metal bands to employ a female lead vocalist. Heyzer remained for the band's pre-split album, 2003's Savage or Grace, with van de Polder briefly returning as a guitarist. The band imploded after a grueling tour. After a year-long break, the ever-restless Kloosterwaard wanted to form a new band with himself as lead vocalist. He enlisted bassist Bas van den Bogaard and drummer Paul Beltman for the endeavor. The trio decided their sound so closely resembled Sinister's that they resurrected the name and brought Paul back as a guitarist for Afterburner in 2006, but the new incarnation of the band saw personnel changes immediately: Beltman left immediately after the tour. Kloosterwaard, Paul, and van den Bogaard drafted Edwin van den Eeden as drummer and hired several bassists and/or guitarists to tour. Upon returning to Holland, they immediately re-entered the studio and cut The Silent Howling, an album critics called a return to "classic form." After promotional touring, van den Bogaard left the band a trio. In addition to playing guitar, Paul took over bass duties. This incarnation issued 2010's Legacy of Ashes. Critical reception remained supportive and fans unreservedly embraced the album and pushed sales figures and concert receipts to new heights. After releasing the aptly titled retrospective box set Altered Since Birth 1990-2010 and touring in support, Sinister completely imploded once more. Kloosterwaard, not at all anxious to go on hiatus again and very conscious of the band's higher profile, assembled an entirely new quintet with guitarists Dennis Hartog and Bastiaan Brussaard, bassist Mathijs Brussaard, and drummer Toep Duin. This version of Sinister released 2010's The Carnage Ending. The critical reception, though quite positive, saw the record as a welcome exercise in '90s death metal revivalism. The lineup toured and remained together for 2012's charting The Post-Apocalyptic Servant and stayed intact through 2015's The Dark Memorials, a somewhat maligned covers set. For its tour, van de Polder temporarily returned to replace Matthias Brussaard. Itself guitarist Ricardo Falcon joined Sinister in time to record 2017's Syncretism, an album that offered the same punishing intensity of its forebears, and songwriting and production ideas that had moodier, spookier textures and spaces to balance the energetic assault. Another box set, The Nuclear Blast Recordings, appeared in 2018, as did a split-single with Profanity, "Hammer Smashed Face" b/w "Catatonia." They became a quartet once again as guitarist Hartog left and bassist Matthias Brussaard returned. In May of 2020, Sinister returned to store shelves and streaming apps with the Massacre-released album Deformation of the Holy Realm, featuring Kloosterwaard and drummer Duin, with new guitarist Michal Grall and bassist Ghislain van der Stel. ~ Thom Jurek, Rovi