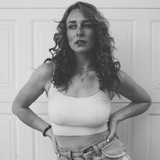 This songstress grew up in Toronto, Ontario, and from the young age of 13, she began pursuing her passion for singing and writing. For Kaylan, it's all about creating a song that pulls on your heartstrings and brings everyone together. Kaylan has her Bachelor of Arts degree from The University of British Columbia, and will soon have her master's in Business Management from the British Columbia Institute of Technology (BCIT). Wanting to use her education to empower herself as a young businesswoman in the music industry, she continues to write and record new music that is set to be released later this year. You can find her original songs featured in films such as Just in Time for Christmas (Hallmark), Preggoland (TIFF & VIFF), Orphan Horse (Jon Voight), The Miracle Season (Helen Hunt), Mighty Oak (Paramount Pictures), and Cats & Dogs 3: Paws Unite! (Warner Bros). Ending 2020 on a high note, Mackinnon was featured in Spotify's editorial playlist New Music Friday. Her newest single "LIES" is now available to all listeners around the world. She is set to release new music later on in 2021.

For bookings and all other inquires please contact missmackinnonmusic@gmail.com