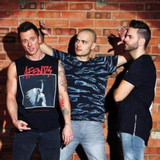 Arriving on the scene in 1997 with 'Slam Dunk Da Funk', Five quickly became one of the UK's bestselling and most popular Bands. J Brown, Sean Conlon, Abz Love, Ritchie Neville and Scott Robinson were formed in the summer of '97 by the same management team behind the Spice Girls.

After the release of their debut single, the group got to work on their first album working alongside some of the world’s best producers. The result being 1998's '5ive' - Hitting number one spot in the UK and went on to spawn six singles also Breaking in to the American Hot 100, landing inside the top 30.