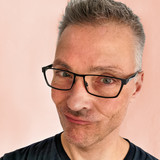 bonsche raised up in a very musical family, parents and sister played several instruments and sang in choirs. So the boy started playing piano at the age of three and guitar at the age of nine. At 16 he formed his first band with four school mates. He went to the SAE (School of Audio Engineering) and became an audio engineer, turning his hobby into his profession. During this time he laid the base of music production. bonsche was inspired by many different artists, he was and still is a great fan of The Fixx - also Yello, Howard Jones, Mike Oldfield, Billy Idol, Kate Bush, The Sisters of Mercy, The Police and Kraftwerk were a great influence. In 2013 he was able to afford building up his own studio, with Ableton Live and several gear (Waves Audio Plugins, Behringer, Beyerdynamic, AKG, Izotope, Rob Papen software a.s.o.). He started recording his first solo project as “bonsche”. His experience as an audio engineer helps him to focus on the music, composition and arrangement. Having also played drums and bass guitar in the past gives bonsche the knowledge of how these instruments are used, which allows him to enhance the human feeling when programming this kind of sounds. He also creates the covers for all tracks and found his own unique style. Enjoy!