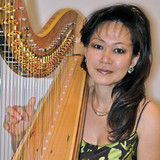 First prize winner of the Elizabeth Herbert Hobin Harp Competition in 1987 and first prize winner of the ‘Lily Laskine’ Chamber Music Competition in 1991, Kyunghee Kim-Sutre is recognized as one of the finest harpists of her generation. Some of her recitals have been broadcast by the channel Muzzik (Festival Ravel, 1998), and by the Arte Channel (Flâneries Musicales in Reims, 1999). Her album of the Jan Ladislav Dussek and Sophia Corri Dussek Sonatas for Solo Harp has garnered critical acclaim and has quickly become a reference for that repertoire. Her new Sonarti CD, Joseph Woelfl: The Paris Years (1801-1805), featuring chamber works by the Austrian composer Joseph Woelfl, was lauded by musical critics, including the Diapason magazine with a 5 of Diapason. Born in Seoul, Kyunghee Kim-Sutre began her musical studies at the age of eight and later entered Seoul National University where she studied with Kyo-Sook Lee. Accepted at the esteemed Curtis Institute of Music, she became the student of Marilyn Costello (soloist with the Philadelphia Orchestra) for four years. After graduating from Curtis, she pursued her musical education with Susan McDonald at The Jacobs School of Music of Indiana University and Brigitte Sylvestre at the Paris Conservatoire Supérieur de Musique where she received a Premier Prix de Harpe à l’Unanimité.<br>