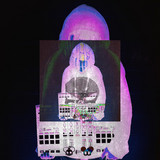 Emanuel K Hudson, born in Oakland,Ca in 1994 and raised in Atlanta. From jazz to hip hop, and music abroad, he has fully experienced a wide range of musical styles throughout his life. In 2013 he began his music career when he spontaneously DJed small parties in Stone Mountain and instantly found his calling. His musical inspiration stems from artists in the mainstream as well as underground, such as Netsky, Skrillex, DMX, Ghostmane, etc. His taste is a refreshing look into each genre he plays, which can range from all flavors of EDM to Hip Hop to Pop and everything in between. His style of mixing forces the crowd to have a great time. No-one walks away from a Skeletrek performance disappointed."I've always been intimately interested in entertainment of all forms. Anything that I can feel true passion emanating from, I would try to study the creation process. What inspired this? What were the obstacles? I've always appreciated a work that would challenge it's genre.Over the years I've learned how sound can move in so many ways.

Not just moving through air, but move emotions, sway ideas. My favorite thing that I've learned about music is that each element has a purpose. Purpose is key in how I create. In chess every decision you make must have a purpose. I found this to be a common truth about nature."