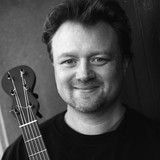 Critically acclaimed musician James Akers was hailed as ‘the great Scottish guitarist’ by Classical Guitar Magazine and, in a review from Gramophone, his playing was described as, ‘containing all the warmth, colour and expressive richness one could hope for.’ Throughout a varied career, James has explored various genres of music from a historical and stylistic perspective, combining diligent research with expressive playing to communicate the continuity of musical endeavour through the centuries. James was born in Scotland and began playing guitar at the age of 10. Initially playing rock and blues then attempting to play jazz and finally settling on the classical guitar, he was largely self-taught before studying at the Royal College of Music, London, where he specialised in period instruments including lute, baroque guitar and theorbo. As an artist, James' interest lies in exploring forgotten music and unearthing lost sounds. Questioning the accepted myths of music history and allowing long silenced voices to be heard anew. Communicating the continuing relevance of the music of the past to today through expressive performances and informed interpretations.