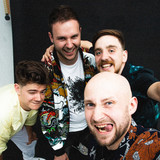 We are Black Star Jackals and our goal is simple: to bring rock music back to the masses! If you like your guitars heavy, drums pounding and melodies catchy as hell, then we're the band for you! We take our lead from the timeless sound of classic heavy/alt-rock that we grew up listening to (think Foo Fighters, Pearl Jam, Soundgarden , Red Hot Chili Peppers, Rage Against The Machine, etc.) and put our own unique spin on it. Described as a "melodically gifted powerhouse", we hit the Glasgow music in mid 2019 and since have quickly garnered new fans, radio airplay on the likes of BBC Introducing and Planet Rock and positive reviews from industry professionals praising our "infectious melodies and hard rock vibes", being compared to bands like Biffy Clyro, Royal Blood, The Amazons, Alter Bridge, to name a few. Kieran's soaring vocals, Steven's infectious guitar hooks, Max's pounding bass lines and Calum's hard hitting drum beats all combine to create a sound that is distinctly our own. In Summer 2019, we won the Scottish Final of the Soundwaves Music Competition. Our debut single Maybe received critical acclaim and was voted as one of the top 10 tracks in Regular Radio’s Independent Hottest 100 in 2019. "There’s really no over-exaggerating what a promising debut this is from the Glaswegian 4-piece melodically gifted powerhouse" - Amelia Vandergast