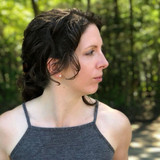 Hailing from the UK, Kerrie Fuller has a longstanding love of singing, songwriting and country music. Classically trained as a teenager at school, her sound has a unique British feel whilst drawing on the neverending influences found in the Americana and Country scenes of Nashville and beyond.   Despite singing and writing from her early years, it was only in her late 20s that Kerrie came across the opportunity to record her songs. In 2013 she began to work on honing what was a rather broad sound. Being British, Kerrie never really thought that she could be a ‘country’ singer as it were, however, after 5 years of musical experimentation and a couple of important distractions along the way (marriage and a baby!), she has finally found her niche in Americana. She is also learning to play the guitar so that she can finally accompany herself when performing.   Kerrie has set up her own recording studio at her home in rural Kent, UK, and is constantly in the processing of writing and recording new material. Her lyrics draw mainly on her past experiences with the aim of giving any listener an open line to her thoughts and feelings, both happy and sad.