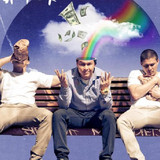 After blowing up online in the Australian rap scene in 2010 with the release of his Mixtape "Green & Gold", along with his smash single "Return Of The King Hit" 140,000 views on YouTube. In 2011 he hit MTV, Channel V & Rage with the success of his single "Feeling Good" Feat. Soul/R&B singer Adam Sutardy off his debut EP "Climbing Hills". In 2012 he moved away from his American influences & released "Macca-The Mixtape" online in his native Northern Territorian style causing controversy & debate from the Australian rap scene & his own fans.

Now in 2020, Emerald Sun returns to pay homage to his old rap style and drops a 26 track monster of an album titled "Mind State Of A Dreamer" produced by the clean, crisp, organic sounds of Sutardy Brothers with also a large contribution from boom bap street vibes of Chilean/Melbourne producer Pabstrakt. This project sat on the artist hard drive for over 9 years, but even though Emerald Sun does not rap in that style no more, he felt it was too classic of an album to leave unheard & dropped it online to pay tribute to his day one