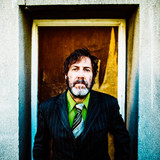 "If we lived in a just world, Peter Bruntnell would by now be in the middle of his third or fourth global arena tour, his biggest worry working out how to courier his latest armful of Grammy awards back to the UK so his butler could have them installed in the west wing of mansion by the time he got home." - The Guardian The self-effacing Devonian is the ultimate musician’s musician, gaining respect from his peers all over the world for the atmospheric works that he creates with his long-distance songwriting partner Bill Ritchie. Kathleen Edwards, when planning her first album, gave the producer Bruntnell’s Normal For Bridgewater album and asked him to “make it sound like this”. Willy Vlautin simply says, “Peter Bruntnell is my favourite singer in the world”. NME claimed that "Peter Bruntnell's records should be taught in schools".