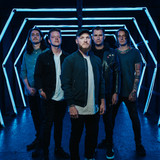 We Came As Romans

Featuring We Came As Romans

Brotherhood lasts forever.    No matter what happens, those bonds endure in memories and moments. We Came As Romans hold a similar link between them. After nearly 15 years together, countless sold out shows, critical acclaim, and over 250 million streams, the Michigan quintet—Joshua Moore [guitar], Dave Stephens [vocals], Lou Cotton [guitar], Andy Glass [bass], and David Puckett [drums]—weather their darkest time and emerge stronger in the name of a fallen brother and member: Kyle Pavone.   The group soldier ahead with a sixth full-length opus befitting of his memory.   After Kyle’s death in 2018, they made a careful decision to push forward, returning to the road with Bullet For My Valentine before gathering themselves in the studio with longtime collaborator Nick Sampson [Asking Alexandria, Born Of Osiris] and seeking perspective from Drew Fulk [Motionless In White, Lil Peep].   We Came As Romans introduce this next chapter with a pair of singles, “Carry The Weight” and “From The First Note.” Evocative clean guitar echoes at the beginning of “Carry The Weight” before giving way to a hammering groove and cathartic screams that culminate on a hypnotic chant—one of the band’s most irresistible.   Meanwhile, “From The First Note” hinges on thick guitars as it delivers a fast and furious elegy. Steamrolling forward on a punk gallop, the chorus rings out, “I can’t replace you.”   In the end, the brotherhood between We Came As Romans lives on.