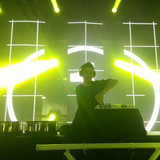 Los Angeles DJ/Producer Bentley Foy is putting a distinctive mark on EDM with his unique approach to producing multi-genre, bass heavy music. This energetic and versatile young artist is also one of the DJ's for the Rhythm Monks who recently headlined the CounterPoint Festival in Atlanta and Lights All Night in Dallas. His music has been released on every major store from Beatport to Spotify and on System Recordings, Moomba+ Records and UFO!'s label China Black Recordings. He has also gained support from blogs such as YourEDM.com, iBroStep.com, MarshmallowGunMusic.com and countless others. A ferocious production talent in the studio and a dance floor destroyer in his live sets, Bentley has DJ'd with a multitude of EDM royalty ranging in style from Flosstradamus to DIgitalism. Bentley has quickly established himself as a defining artist in dance music and the future looks massive.