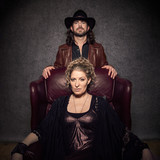 One spring evening in Ridgefield, Washington, Chad and Rachel Hamar walked onto the Clark County Amphitheater stage as 18,000 spectators sized them up. Three or four songs later they left to waves of cheering and applause, plus a lot of puzzled people turning to friends and asking, “Who the hell was that? And why haven’t I heard of them before?”   The answers were simple. Chad and Rachel were and are partners in music and in life. And this gig, opening for mega star Kenny Chesney, was only the second time they’d ever played as Cloverdayle. How they won that opportunity is but one interesting detail in the saga of Cloverdayle. Plenty of history preceded that night, going back to the moment Chad, a college freshman, and Rachel, still in high school, locked eyes across a huge, busy room at a jazz festival. (If you remember the words to “Some Enchanted Evening” or the “Dance at the Gym” scene in West Side Story, it was exactly like that.)   After launching Cloverdayle in 2008, Chad and Rachel started performing their originals as a duo at local coffeehouses. A following grew, first in their community but then throughout the Pacific Northwest. Step by step, they scaled to higher levels of visibility, earning opening slots for Jason Aldean, Eric Church, Lady Antebellum and Tim McGraw. Yet they left when the time was right for Nashville, to seek the stimulus and opportunity that beckoned from Music City.