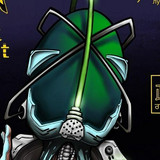 He first appeared in ancient times and has been seen over the centuries in many forms always taking the name of Gus McArthur. Rumored to be Welsh, Scottish, and even Roman he has always appeared in times of war and upheaval standing in the shadows, not quite visible, but always watching. In the last century Gus was present in the trenches during WWI, seen flying planes in the Battle of Britain during WWII, with rumors of Gus sightings even today in Iraq and Afghanistan. Many attempts have been made to capture his image but the band Gus McArthur were the first to see him in his truest form and wear his mask to channel him in their performances. His words are their words, his music their music - biting, intense, and timeless. Gus is everywhere, has been there always, listen to what he has to say.