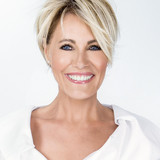 Belgium based iconic singer Dana Winner (Universal Music) has sold over 3,5 million albums in Europe (Belgium, The Netherlands, Germany, Denmark, Austria, Sweden, Switzerland, …) and in her home away from home, South Africa. The stunning live performer, known for her angelic voice, has touched millions of people all over the world with her breath taking performance of Whitney Houston’s ‘One Moment In Time’ (https://www.youtube.com/watch?v=Tb6AW00DgTI). After being broadcasted on Brazilian TV network SBT, these YouTube video’s have been viewed by over 55 million people today. Dana Winner was one of the coaches of ‘The Voice Senior’ in Belgium, she sold out the Antwerp Lotto Arena in 2019 and announced an even bigger arena show in the Antwerps Sportpaleis (15.000 seats) on Oct 31, 2020. While recording a new studio album, Dana Winner is currently touring in theaters throughout Belgium, The Netherlands and the singer is set to perform in South Africa, Namibia and Germany by the end of the year. More info on www.danawinner.com