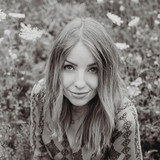 Dutch-born New Brunswick (Canada) singer-songwriter Masha Maria writes dreamy songs influenced by her surroundings and turns small observations into poignant stories. Her own story started in Groningen, the Netherlands. Travelling as a street musician, she has seen all of Europe’s nooks and crannies which eventually took her across the ocean to Nashville, TN. While exploring the music cities of North-America, she ended up moving to Toronto, Canada and now lives in a small seaside town in the Maritimes, surrounded by woods. After being a backing vocalist for several years in the Dutch dream pop band WONDER, she released her first solo EP ‘Homes’ in 2016, a close collaboration with producer and sound artist Patrick Schaafstal. Currently, she is working on a long-distance recording project with the in the Netherlands based Marije de Vries and United Kingdom-based Jeremy Johnson. Their first release ’12:56’ will be available on 21/8/2021.