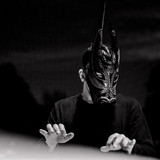 Lambert is a Berlin-based pianist, composer and producer from Hamburg. Lambert’s sixth album False is where everything changes for the genre-defying pianist. He first emerged with 2014’s self-titled album, which ignited the world of contemporary classical music – largely because it showed Lambert was a talent too broad to be pigeonholed as “contemporary classical pianist”. In the five years since, Lambert released an album a year, also working with English folk singer Brookln Dekker of Rue Royale on the acclaimed album We Share Phenomena and fellow German visionary Stimming on the magical EP Exodus. He also composed several wonderful soundtracks. Live shows became an essential event, evenings of mystique and wonder as the dazzling musicianship of Lambert’s trio was conveyed while wearing matching horned Sardinian masks. Never seen without his mask as his music became yet more accomplished, speculation naturally intensified as to Lambert’s identity. Rumours grew that Lambert had opened a camp where he trained promising musicians how to “become Lambert”. In exploring the meanings of identity, Lambert’s 2019 album was called True. Calling his new album False seems a natural next step – and it’s a stunning record, where Lambert explodes all the known truths of Lambert’s Universe, or the Lambiverse, if you will.