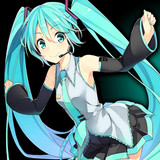 With a name that means "the first sound of the future" in Japanese, Hatsune Miku became one of the most popular synthetic voice programs -- known as vocaloids -- and the first to become a pop star. Created and distributed by Japan's Crypton Future Media company, Hatsune's voice was sampled from actress Saki Fujita and her first release arrived in August 2007. Envisioned by Crypton as an "android diva" from a time in the not-too-distant future "where songs are lost," her distinctive appearance as a petite 16 year-old with long turquoise pigtails was developed by the artist KEI and was inspired in part by Yamaha keyboards and the vocaloid program's interface. Reflecting Hatsune's popularity with professional and amateur users, her vocals have been used on over 100,000 released songs, including tracks by Supercell, Absorb, and Livetune. Pharrell Williams remixed one of the latter group's songs, "Last Night, Good Night." A compilation featuring her voice, Exit Tunes Presents Vocalogenesis feat. Hatsune Miku, became the first vocaloid album to top the charts when it debuted in May 2010. Hatsune's voice was also used on the original version of the Nyan Cat song, which was uploaded to the Japanese video site Niconico that July. To complete her pop star persona, she performs in concert as an animated projection and made her on-stage debut in August 2009 at Animelo Summer Live. Hatsune's performances include appearances throughout Asia and in North America, including a stint as the opening act for Lady Gaga's Artpop tour in May and June of 2014. That October, Hatsune made her American network television debut, singing "Share the World" on The Late Show with David Letterman. In February 2016, the installation/performance Still Be Here premiered at Berlin's CTM Festival. Based on an idea from conceptual artist Mari Matsutoya and scored by Laurel Halo, the piece explored the realities -- virtual and otherwise -- of a 21st century pop star and searched for Miku's identity. A few months later, Hatsune Miku began her first North American tour and released a commemorative EP. ~ Heather Phares, Rovi