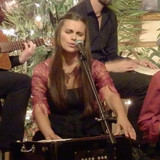 Katarina Gadjanski & Gypsy Fever Collective will take you on an enchanting musical journey across former Yugoslavia, bringing you delightful traditional music from all over this region. www.gypsyfever.co.uk Heartbroken by the fragmentation of Yugoslavia Katarina longed to once again reunite the disjointed regions of the country and heal the wounds of her homeland through the soulfulness of its traditional music.

She embarked upon mesmerising journey re-discovering beautifully archaic folk tunes of Yugoslavia - and the new GF Collective project was born as a result. Although born in peoples sorrow, the celebratory nature of the traditional folk music of Yugoslavia defies the difficult and marginal existence of the war-torn country, a country that now exists only in its soulful traditional music. Along with Katarina’s Indian harmonium, many instruments Gypsy Fever play are not indigenous to former Yugoslavia. The idea was to introduce traditional instruments of other cultures and create a new sound, by adding Celtic whistles, Italian mandolin, Spanish cajon, Turkish yayli tanbur,