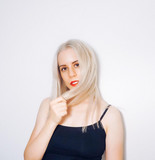 Ámaris Wen is a London-based recording artist, music producer, actor, and songwriter. The recording artist, who is known for futuristic recordings and unconventional blends of genres, not only produces, sings, and composes, but also co- produces music videos and short films. ‘Creativity is my fuel,’ says Ámaris.   She received her formal training at drama school, and released her first album in 2014. She then worked as a playlist manager for major record labels before releasing her first R&B and synthpop-influenced album “Neon Colours”, which was well-received by critics.   Outlets such as youredm.com have said about her music that “her vocals are definitely in the R&B and neo soul wheelhouse, but the unconventional structure really takes them somewhere else, closer to electronica.”   Source: https://amariswen.com