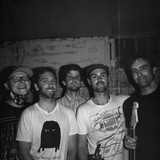 Walter Etc. is the brainchild of Dustin Cole Hayes, who has been creating music (originally as Walter Mitty and His Makeshift Orchestra), writings, videos, and art between Southern California and Portland, OR for over a decade. He co-runs the label and art collective Making New Enemies with Milk Flud, and has worked alongside Jeff Rosenstock and Ian Farmer (Slaughter Beach, Dog / Modern Baseball) in the studio. Walter's newest album "There There" (self-released via Making New Enemies, May 7th 2021) showcases the band's return to a home-recorded and self-produced approach. With a revolving door of band members and a foray into different genres, it is Hayes' gift for lyricism and DIY ethos that holds all of his projects together in one cohesive canon. (Pics by Andrew Arevalo and Iphone "people" album)