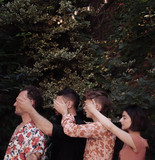 Hailing from the Meadowlands of New Jersey, Wyland have made a name for themselves in the live circuit. Conjuring a bit of grit with the indie spirit of acts like Foals and the Arctic Monkeys, the band creates a fresh and unique live experience that sets them apart from their contemporaries.   Their sound reached overseas to Ireland, where the band spent the better half of 2018 recording with producer Philip Magee (Kodaline, Miles Kane, The Academic).   They recently finished an East Coast tour with Universal recording artist Valley, and their last single 'Nowhere Now' amassed over 130,000 streams on Spotify since its release in late 2018. It was also featured on Spotify's Fresh Finds playlist shortly after its release.   The alt-rock group has performed at festivals alongside acts like Mumford and Sons, Alabama Shakes, The Maccabees, The Flaming Lips and many more while receiving praise from outlets such as Ones to Watch, The Line of Best Fit, Clash, Born Music and more.