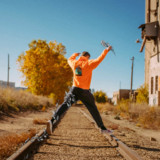 “Settle in the space between... It’s where the flowers like to grow.” Exploring the complexity of life choices, Warren Thomas Fenzi challenges any clear line between generalities, inner truth and self doubt. Suspended, he peers into a looking glass, exploring the possibility that what we believe to be legitimate and authentic, may not be so. While inviting his listeners on a journey of introspection, Fenzi fosters an ongoing curiosity and examination of the emotional disunion we often find ourselves in. As a multi-instrumentalist, his explorations in sound and songwriting lay the foundation for what has become his unique style of cinematic, musical story telling. Since releasing his debut album, Fenzi has performed on multiple national radio and television programs; toured the US, opening for well known artists such as; Mother Mother, Michigander, Kyle Craft, and Walker Lukens, and has received both national and international critical acclaim through radio, print and new media. “Garden Street,” his new, upcoming dual album release takes the listener one step farther along a pictorial musical path that explores the duality of life. The project reaches for the rich fabric of diversity, dissonance, harmony and the thin line we all walk between The Upside and The Downside. With each song from the project being released singularly, Fenzi underscores his unique style of storytelling while continuing to evolve his art with an unyielding earnestness that is undeniable.