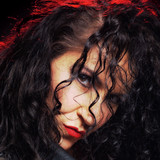 Born in Covina, California, Ava Lemert began making up songs at about age three, when her sister let her sing a song onto a cassette recorder! Ava's musical journey has taken her from starting on clarinet at age 11, after a bicycle accident meant she couldn't play or participate in sports, as a "tomboy," and that this happened during Summer, she needed a pastime. From there Ava found that she could write songs once she had basic music classes in primary school. In High School, Ava was the youngest, and first female Drum Major of her school's marching band, and had her first alto saxophone, so she could follow her pianist sister, and be in jazz band. Ava was actively playing until she took a long break, "Living in an apartment wasn't ideal for playing and writing music, especially on a saxophone!" Now that she has returned to her passion, Ava has made the GRAMMY Awards ballot a total of 6 times since 2017, when she was first eligible. 2021 will be filled with new music from Ava, on March 12th, Ava released "Today Is My Day!" a rework of an old cassette tape demo from her school days, on April 9th, an 80's rocker, "Take It Easy,"