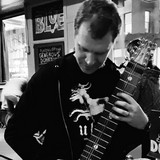 Generally in a state of perpetual incompletion, the music of Focused and Blinded has always been a work in progress. The more songs they write as the years go on, the deeper the void gets. The endless archive of riffs and songs stretches further to infinity. The hopes that someone, anyone, will have some type of human response to the feelings and emotions conveyed through their music has always been an important objective of the band. Above all, a true love of the guitar and for deep, emotional music has driven the band to keep playing and creating for quite some time. After playing music for years together whilst growing up in New England, Justin Colangelo and Dan Rubin found a common interest in riff-powered acoustic music. In sharing a very similar musical upbringing, as well as a drive to uncover new, complex and emotional music, they embarked on a musical journey that hopefully has no conclusion. After playing in a successful death metal band for years, their lives were both shaken by the sudden and tragic passing of a very dear friend and fellow bandmate. In response to this, they both worked together on a dirge for this friend. It was here that Focused and Blinded began.