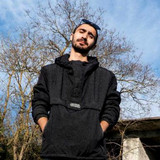 Furkan "naperva *" Baran is a Turkish-lyric rap music writer, producer and one of the owners of "432" record labels. He has published 6 underground albums (see: oksimoron) and numerous singles (see: güzden beri.) since 2013, and in this process, he changed three cities, namely Istanbul, Mersin and Van. He worked with many names that have proven themselves in the rap music market (see: Cem Adrian, Kezzo, Siirbaz, Armonycoma or slt, Emiladil and more). He has been featured in a Turkish rap documentary in which he featured prominent rappers in recent months.