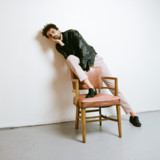 Written in between bar shifts and soundchecks and recorded in a garage behind a Chinese restaurant in downtown Toronto, produced by Matthew Bailey, engineered by Chris Stringer (Timber Timbre), mixed by D James Goodwin (Kevin Morby, Craig Finn) and mastered by Philip Bova Shaw (Feist, Andy Shauf), THIS CITY is the result of the kind of heartbreaking, and redemptive work that compels us to be better. After three albums and years spent fronting the scrappy powerfolk band Sam Cash & The Romantic Dogs; touring as a headliner and opening for the likes of Hannah Georgas, July Talk, The Strumbellas, Arkells, and Lights, Cash has made the bold and ambitious decision to shake off the past and move forward.

With 3am pianos, buzzing guitars and his distinct vocal rasp THIS CITY transforms Cash’s self-reflective journey into something universally epic, enveloping the wide-eyed dreamer in us all. “All we are looking for is massive connection,” he sings. While surely a forerunner for one of 2020’s most exciting releases, Sameer Cash’s THIS CITY is a journey you keep telling yourself you need to make but you just can’t seem to get around to it. Don’t worry though, Cash has done all the heavy lifting. All you have to do is push play.