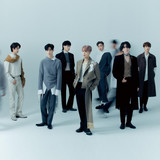 South Korean boy band GOT7 (Romanized to "Gatsebeun" from the Korean) were formed in 2014 by K-pop training empire JYP Entertainment (Rain, the Wonder Girls). The titular seven members were South Koreans JB and Junior (or Jinyoung) formerly of the J.J. Project, Youngjae, and Yugyeom; American-born Taiwanese Mark; Jackson from Hong Kong; and BamBam from Thailand. The latter four joined the group after competing on the South Korean reality show Who Is Next: WIN. Typical of other multi-member K-pop groups, the boy band employed a mixture of rapping, R&B-inflected crooning, and layered harmonies, as well as expertly synchronized dance moves. GOT7's first EP, Got It?, was released in early 2014 and six months later, Got Love quickly followed. Their first full-length, Identify, was released in late 2014 and included the hit "Stop Stop It." Atypical of the fast-moving, ephemeral nature of the K-pop industry, they wouldn't release their next EP until a full eight months later, in July 2015. That "mini-album," Just Right, was immediately followed by their second Billboard World chart-topper, Mad, a six-song ride of futuristic techno-R&B, slinky pop, and catchy hooks. Beginning in March of 2016, GOT7 launched a series of releases under the title Flight Log. The Flight Log: Departure EP was followed later that year by a full album, Flight Log: Turbulence. Flight Log: Arrival landed in early 2017, continuing GOT7's international hot streak and making further inroads in the U.S. with a number three placement on Billboard's Heatseekers chart. Months later, GOT7 released their seventh EP, 7 for 7. Eyes on You arrived in March 2018, yielding the single "Look," which topped international charts, and they issued their third full-length, Present: You, later that year. The group released several mini-albums and EPs in 2019, including Spinning Top, Love Loop, and Call My Name. The Dye EP, which included the lead single "Not by the Moon," arrived in spring of 2020. It was followed that fall by the group's fourth full-length, Breath of Love: Last Piece. ~ Neil Z. Yeung, Rovi