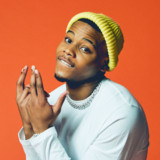 Raised in Zimbabwe, 19-year-old singer Donel has spent the last few years honing his unique pop vision, seamlessly blending Top 40 and R&B with the sounds he grew up listening to, like Afropop. The world first met Donel in 2018 when he released his first hit, “Bang Like a Drum,” a misty party-starter that quickly garnered over 4 million streams. Ever since, Donel has spent every second carving out his new sound. His heart-melting voice caught the ears of Walshy Fire and Mr. Eazi, and in 2020, he released the flirty “Wish You Well” on Eazi’s emPawa Africa label. A self-taught dancer with an infectious personality, Donel quickly carved out a large social media presence while he honed his songwriting. Artistry Records CEO Max Gousse was so blown away by Donel’s talent that he and A&R Monica Payne quickly signed him to their Warner Records venture. On his newly released EP, African Boy Pt.1, we get a taste of what’s to come: basslines that will make you move, drums that’ll loop in your head, and smooth lyrics tailor-made for swooning.