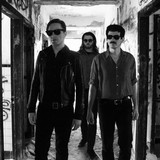 It might be difficult to dig up information on Tampa, Florida's Merchandise, due to the ubiquity of the name in online searches, but they are even harder to define. The trio members accurately self-describe their genre as "somewhere in the grey area of punk, noise, and pop music." The group was originally formed as a home-recording project in 2008 known as the Dry County, for which vocalist Carson Cox and guitarist David Vassalotti swapped instruments (bass, guitar, keyboard, and percussion), while Patrick Brady stuck to bass. After self-releasing a few cassettes and an EP, Katorga Works released (Strange Songs) In the Dark in 2010, followed by 2012's Children of Desire. Taking a more experimental bent, 2013's Totale Nite only contained five long tracks. In early 2014, the band signed with esteemed U.K. label 4AD to release After the End, a more straightforward pop album that drew heavily from late-'80s college and alternative rock. Their follow-up, 2016's Corpse Wired for Sound, was recorded partially in Rosà, Italy and at home in Tampa. ~ Jason Lymangrover, Rovi