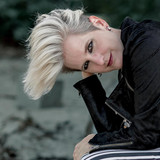 Anne Stott is an indie rock singer/songwriter. She is an actor. A political rabble rouser. A thought thinker and a dream dreamer. A life liver. A seeker of more. A flawed worshipper at the altar of love. Welcome to her world. Stott has recorded three albums of original material: Love Never Dies (2015) Pennsylvania (2010) Untitled Mind (2005) Love Never Dies was called « a stunner » and peaked at #19 on the Relix Magazine radio chart. Stott’s one woman show, Scorpio Blonde, premiered at the Afterglow Festival. Her TEDx Provincetown talk, Get Lost, can be found on YouTube. Stott has appeared in numerous plays and short films. She has produced and directed several music videos, a documentary and a public access TV series. For more Anne, check her website: theannestott.com To hear see feel what’s next, become a Patron at Patreon.com/theannestott