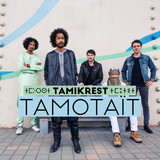 " ...Tamikrest is a cutting-edge 21st-century rock group that just happens to live in the middle of one of the world’s most remote deserts..." “The heaviest desert rock-out yet … Tamikrest’s music blazes with a righteous intensity that is almost scary.” Tamikrest is tamasheq for junction, connection. Since the 5 group members come from different regions of the world, it’s an ideal word to describe the band. Their music is a tribute to the Touareg identity, spiced up with modern rock influences. Lyrics are about the never-ending longing to a free world. Through the message of their songs, Tamikrest wants to make Tamasheq poetry and culture accessible to inhabitants of a world larger than the immensity of the Saharian desert. “A desert hosts us, a language unites us, a culture binds us.” The story begins at Kidal, capital of the eighth Region of Mali, the tea is boiling... Pino, Cheikh and Mossa had just finished a guitar workshop with Juhan Ecaré (guitarist for Meiway) when they decided to form a group with only two old ‘home made’ guitars. And they got to work… “Even though we are young, guitars still have six cords!” Some years later, Tamikrest can be proud on their path. The band played some major international stages and has fans all around the world. Nowadays, Tamikrest sounds tighter than ever. The 5-piece formation (lead guitar, rhythm guitar, bass, djembé and drums) is a feast for the ears and eyes! Adventurous music with a twist of familiarity.