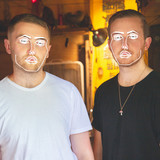 A pop-oriented synthesis of numerous styles, including house, garage, dubstep, and bass, along with well-timed vocal collaborations, made Disclosure one of the most successful production teams of the 2010s. Although they broke through while the path to commercial success was shortening for acts classified as EDM (electronic dance music), the duo, consisting of English siblings Guy and Howard Lawrence, separated themselves with a deeper awareness of underground dance music dating back to the disco era. After debuting in 2010, the pair quickly accelerated to making lustrous, impeccably assembled pop songs, led by the global 2012 hit "Latch," featuring the then-obscure Sam Smith. The approach continued with the chart-topping, Grammy-nominated albums Settle and Caracal, issued respectively in 2013 and 2015, which added the likes of AlunaGeorge, Eliza Doolittle, Mary J. Blige, and the Weeknd to their circle. They returned in 2018 with a series of singles and in 2020 offered their third album, Energy. Children of musicians, siblings Guy and Howard Lawrence absorbed music throughout their upbringing in the town of Reigate in Surrey, England. They learned to play multiple instruments as kids and studied music at Reigate College, all the while immersing themselves in hip-hop and house, as well as dubstep and bass, the latest developments in the U.K. hardcore continuum. Already acquainted with soul, funk, and disco from their household environment, the siblings traced current underground club music back to '80s Chicago house and Detroit techno, connected those developments to '90s U.K. garage, and applied their numerous inspirations to a modern hybrid sound that grew increasingly distinctive. Early material uploaded to MySpace in 2010 led to interest from the Moshi Moshi label, which released the scruffy dubstep-oriented tracks "Offline Dexterity" and "Street Light Chronicle" as a single later that year. The Lawrences continued to find their footing through mid-2012, a period during which they released singles and EPs for Transparent, Make Mine, and Greco-Roman. The last of those independent outlets issued The Face EP, the first Disclosure release to feature vocalists instead of processed vocal samples. Bolstered by a U.K. deal with the Universal-distributed PMR label, Disclosure made a commercial breakthrough with "Latch," an atmospheric and loping ballad featuring co-songwriting from Jimmy Napes and a bursting lead vocal from Sam Smith. More pop-oriented than Disclosure's previous output, the song sent the Lawrences and the previously obscure Smith into the mainstream. Released in October 2012, it peaked at number 11 during a 55-week stay on the U.K. chart. By the time parent album Settle was out the following May, the duo scored additional hits with the AlunaGeorge collaboration "White Noise," which went to number two, and the Eliza Doolittle showcase "You & Me," which peaked at number six. In the U.S., where the duo secured another Universal distribution deal via Cherrytree and Interscope, "Latch" became a sleeper hit. It first entered the Hot 100 in April 2014, reached number seven during a chart run of 19 weeks, and eventually went multi-platinum. Settle topped the U.K. album chart and the U.S. electronic chart. It was nominated for the U.K. Mercury Prize and in the U.S. was nominated for a 2014 Grammy Award in the category of Best Dance/Electronic Album. The Lawrences' stateside stock continued to rise. They produced a pair of tracks on Mary J. Blige's The London Sessions, released in late 2014. Only a couple weeks later, they received their second Grammy nomination, this time in the category of Best Dance Recording, for a Blige-fronted version of "F for You" that appeared on a deluxe edition of Settle. All of this success, plus a world tour, led to increased collaborative star power for the second Disclosure album. Released in September 2015 on PMR in the U.K. and Capitol in the U.S., Caracal featured guest lead vocals from Gregory Porter, Sam Smith, Lorde, and the Weeknd on its singles, and affirmed the duo's affinity for R&B with strong cuts fronted by Kwabs, Miguel, and Nao. Like the debut, Caracal topped the U.K. pop and U.S. electronic charts. Additionally, it debuted in the Top Ten of the Billboard 200 and was up that year for the Best Dance/Electronica Album Grammy. Following Moog for Love, a three-track EP highlighted by "Feel Like I Do" with Al Green, the Lawrences took a break. They returned in 2018 with a slew of singles starting with "Ultimatum," a sparkling collaboration with Fatoumata Diawara that led to the brothers' fourth Grammy nomination. The following year saw the duo hit the Top Ten in the U.K. and U.S. as producers of Khalid's "Talk," which led to yet another Grammy nomination, this time for Record of the Year, one of the "big four" categories. Khalid was then the featured artist on "Know Your Worth," Disclosure's first single of 2020. A collaboration with Aminé and Slowthai ("My High") and another one with Diawara ("Douha [Mali Mal]") increased anticipation for the August release of Disclosure's third proper album, Energy. ~ Andy Kellman, Rovi